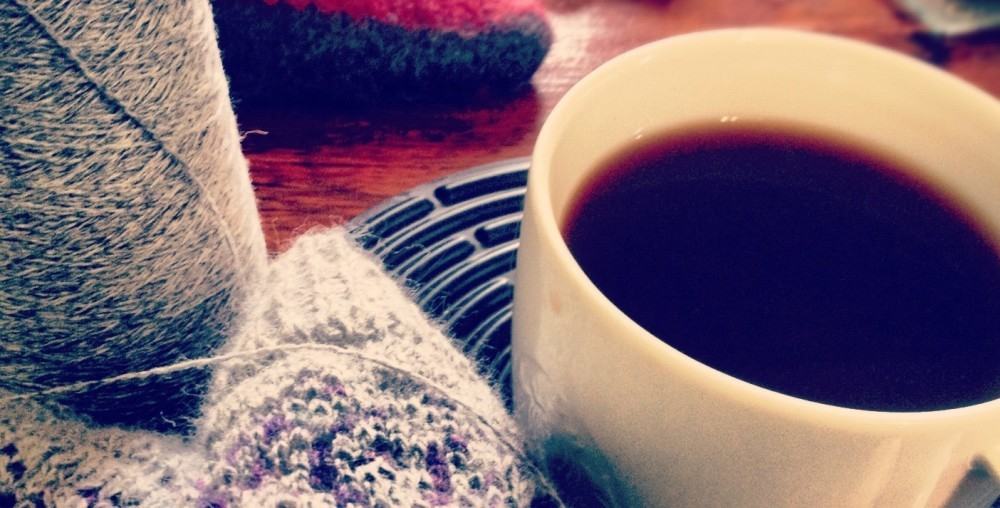 Earlier this week I wrote about how knitting can be a useful activity when you are trying to quit smoking. The driving force behind writing that post came from thinking about this one, really… how that action of in-around-through-off; steering yarn around the needles can provide focus when distraction is rife and can bring calm to chaos.

Listeners to the KnitBritish podcast might remember my review of Knitting Yarns: Writers on Knitting, compiled by Ann Hood and how many of the contributers wrote of how knitting assisted them through so many of life’s ups and downs and how learning to knit – though providing its own challenges – can have “healing powers”. Ever since reading this book these ideas have been swimming around my head, confirming and making me evaluate what I have always known myself, through my own experiences and ruminating on a blog post.  I say ruminating, as although I do write-from-the-heart-and-shoot-from-the-hip, I do find it hard to tackle some personal topics.

Knitting came into my life when I was in quite a dark place.  I had just come to the realisation (for realisation read breakdown) that I was suffering from depression –  I hadn’t dealt with my grief following my dad’s death and also due to the fact that  I was dealing with VERY unwanted attention from someone, I also – in my infinite wisdom – decided to give up smoking. (phew! how was that for opening up?!)

Looking back, I was definitely punishing myself with giving up smoking. I was in the bottom of a deep hole and wanted to replace all the things I felt were happening to me, with something I could self-inflict. Do you understand what I mean by that? I felt I needed to bring some other kind of pain on myself that I could control. It wasn’t right…and consequently, of course, I didn’t kick the habit that time because I could punish myself more when I gave into the cravings.

My first piece of knitting from this time was truly woeful – I knit better as a child, before I let it lapse! As I explained in the last post, I had bought some purple acrylic and 4mm long needles and I hadn’t gone into the shop to get these, but I knew on some level that I needed to buy them. I needed to try something, Having spent a good deal of time remembering how to cast on, I began to knit. I wasn’t fooling myself, I wasn’t attempting to knit a garment. I just wanted to knit.

For about 2 weeks the knitting sat in the arm of my chair and every ill thought, every pinch of fear, every moment of uncertainty, every rise of panic there was a stitch made: my stress and anxiety were in those first attempts and it was evident from my tension. Some rows I could barely get the needle in the stitch, it was so tight around the needle. Other stitches were so loose and rows so miserably knit that the loops gaped. I was completely and utterly frustrated by what I was going through and also at my lack of knitting skills. Whatever I was knitting was becoming curved on one edge, much to my annoyance, and after asking my mum why we realised I was knitting into the back of the last stitch!  I couldn’t even bloody knit straight! I decided I would cast off and start again and then I cried for hours when I realised I couldn’t remember to cast off.

It could have been so easy to not bother any more but, like I said, I knew I needed it, I was seeing a doctor and waiting to see a counsellor; although I felt my problems were far from over I knew they were somewhat in hand. What wasn’t quite in hand was the ordering of my thoughts and I felt I had no focus. I could have no thoughts and I could have a million. I knew I needed something to train my thoughts on. I knit scraps of garter, stockinette and rib;  I cast off and on and threw away mistakes too quickly, not realising there was a certain (eventual) satisfaction from learning from one’s mistakes.

I didn’t realise that there was a huge knitting community, In the early stages I was just knitting to knit. I didn’t even tell anyone that I had learned to knit. It was my secret solitude…In-around-through-off…steady stitches for steadying thought. I never thought I could knit to make something useful at that point. but as my mind calmed with that in-around-through-off and as I began to focus on my time by the the reassuring click of needles, I started to wonder if I could do more. A colleague told me about Ravelry and my eyes were opened to putting my new skills into making something that I might be able to actually wear…

…And that forms part of the second part of knitting my journey.

I said earlier that I was ruminating on this post and It was the comments on the Stub it out and Cast it on post that helped give me the nudge to write it, particularly Jackie’s comment;

Knitting can help you through all sorts of things, for me it was the thread/yarn that kept me connected to the world when I was in the deepest darkest well of depression, I’d even go so far as to say it cured me, but it’s probably safer to say that knitting allowed me to own my depression, rather than to have it own me.

This is the kind of function that knitting can serve – a life line, an honest-to-goodness anchor when everything else is in flux – and I guess that is why I get inordinately soap-boxy when the media  relegate knitting to grannie stereotypes and celeb fads.

Knitting can get you through.