This was created by Mason Dixon Knitting’s Kay Gardiner (@KayGardiner ) in response to a piece on the Guardian/Observer website entitled, Knitting and needlework: relaxing hobbies or seditious activities?

On the surface it looks like…could it be?…an article about knitting, written by a knitter regarding the practice from within the practice. No, it couldn’t be. What it was, in fact, was another lazy look at the “recent revival” in knitting and crafts. Recent? Revival? Is anyone else sick to death of the use of these words when it comes to knitting being mentioned in the media.

“Yes!” she said, upon discovering a rusty pair of needles in a dusty needle-roll in a museum vault and holding them aloft, “let’s start a knitting revival”, said no knitter. Never!

The author seems to be trying to dispel some myths about knitting, but ends up entirely ladling stereotype and cliché over a pile of yarn barf. Why, oh why, oh why does any mention of knitting HAVE to be accompanied by the association of grannies? There is even a large archive image of older women standing over the garden fence knitting, only strengthening the stereotype and image that knitting is the pastime of crones, with nothing better to do.

To add insult to injury the article continues on to state that, guess what? it is ok to be seen to be doing this thing, this “relic of women’s domestic servitude”, because Kate Moss and the Duchess of Cambridge have been seen knitting. High class and high fashion mean it is ok?  *resists urge to swear violently*

To say that this “recent interest” in knitting is due to high profile celebs taking up the practice is insulting, especially coming from someone who appears to be a knitter.  Again I say, why, oh why, oh why? Why, when there are millions of knitters out there, do journalists take the lazy and ill-informed approach  of barely scraping the surface of the thing? – interview people; look at Ravelry and its 4 million users; find your local knitting group; look how many yarn festivals, crawls and related events there are out there. Surely to goodness it is not difficult to see that knitting has been a hobby that has been enjoyed for many, many years by a diverse and varied bunch of people – all ages and both sexes – you might think that what you write is only going to be of interest to a small minority of readers, but arming yourself with a bit of research and info is a powerful thing!

Knitting doesn’t need to be revived!   Yes, there’s been a shift from occupation to recreation over the years and there are areas of the craft that one could say are on the wane. Here I mean very local traditions of knitting certain styles, where perhaps the main upholders of the style or patterns have passed on or  – like in Shetland – the decline of knitting in the younger generation as school budgets that accommodated its teaching were cut. However this does not detract from the fact that knitting never went away. It has boomed for sure, gone from strength to strength, gaining popularity and new inknitiates. While we may have seen the Kates knit in the news, perhaps it is only a recent interest for them!

I know I don’t need to tell any of this to the majority of you – but this kind of rainy day, space-filling pap really annoys me. If newspapers really want to fill space with interest in traditional crafts  – and traditional does not mean dust-covered and ancient! – then at least do a bit of legwork. 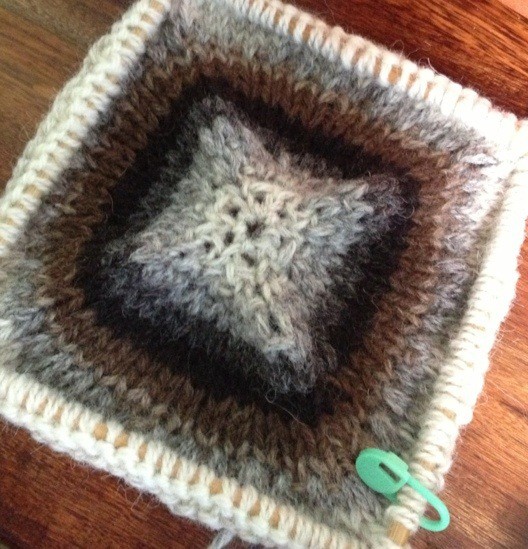 That idea that knitting is cool now, cos trendy people do it (!) is further galling when the author makes a comment that knitting is something to do “for women who just have too much time on their hands”. Oh! and there is also the assertion that knitting is now art, nothing practical, or terribly useful – just art for lazy gals. I resist the urge to swear, but please feel free to use your own expletives here.

Another lazy omission – there is no mention of the importance and the definite rise in knitting groups  – a bunch lazy gals sitting around and knitting together  maybe doesn’t carry much interest for the author.

And the importance of thing which every knitter needs isn’t really stressed either. Oh, ok, wool and yarn are mentioned, but in reference to dusty boxes, spinning goddesses, weaving witches and Ghandi – which do you relate to more?!  How about a word on yarn from indie dyers, or any British yarn company? Revival knitters have no interest in yarn, right?

I now draw your attention to the sentence that craps over every knitter, every where, ever.

Needlecraft, it seems, is just not relevant to the reality of modern women’s lives.

Twitter knitters were incensed – some felt “stabby and crabby” –  and it was Kay who then  tweeted,

OK, just for fun and to educate @guardian : knitters tweet their other occupations with hashtag #ANDknitting

I urge you to read the #ANDknitting thread on twitter – although no amount of tweeting or blogging will make a difference to a newspaper who publishes lazily researched pieces, rather than something of real interest and substance – just you see how irrelevant knitting is to people’s lives.

I fonging love being part of this love-in of knitters, this tightly wound skein of like-minded individuals who, excluding that author, find that knitting and craft is not only something they do, but find it is part of them and connects them to so many.

Like I said when I reviewed Ann Hood’s excellent compilation, Knitting Yarns: Writers on Knitting, (on the latest podcast) knitting is about connections with others; those who taught us, those we now knit with or pass the skills onto. Knitting is learning. There are tough lessons along the way in the quest to create and perfect – not to mention the crazy maths, the decoding of instructions, the horror of realising a dropped stitch 9 rows back and the victory of managing to loop it back up through your garment to put it back on the needle!

For me knitting is something I have connections to in my family’s past, but it is also something I do for fun, for love, knitting for peace and for clarity and to push myself to learn new skills within the craft. When you knit you watch the time that you spend doing it become something. There is the act of knitting and there is the creation of something – most people knit to do both, some knit to keep busy or find calm and others make a career of knitting.

There is knitting for art too (so neatly coupled with the idea of time, above), but do not for one second believe that because someone knits they are doing it to waste time or just because one has nothing better to do. (Nothing better to do is perhaps a good description of the author at the time of writing her piece on the knitting revival)

#ANDknitting people? Knitting people do not knit because celebs do. we knit to the click of our own sticks ( I am copyrighting that phrase!)

By that I do not simply mean that each knitter is singularly unique in their craft; we form a collective rhythm of clicking sticks. We blaze our own trails and, actually, have our own knitting inspirational figures, such as designers and those who work in the wool and knit industry promoting knitting a wool the right way! – although instead of knitting because they do, we continue to knit as we are inspired by what they bring to the craft.

From one riling, hackle-raising attempt at looking at an aspect of everyday culture to then reading #ANDknitting  – I feel even more secure in the knowledge that crafty people are the best bloody people in the world and while there will always be the uninitiated who say “hmmm, I wish I had time to sit and knit all day” or “Knitting? Like what grandma’s do?”  we will stand united, safe in the knowledge that if we really wanted to, we *could* impale them on our DPNS or throttle them with our circs, but we’ll quietly carry on, perhaps being the only ones lucky to truly know the revelations and intricacies of the knitting world we occupy.