I slightly hesitate in beginning another post featuring Fair Isle, but let me say first many thanks for all the shares and comments on the Origin & Ownership blog.  I was particularly careful to say throughout that post that those were my thoughts on the subject. I was not tackling why we often refer to any colourwork as Fair Isle,  but rather musing on ideas of ownership within that umbrella. Yes, as one commenter pointed out, there IS rigidity in calling everything Fair Isle, but that’s an interesting blog for another day.

The lovelyfella and I were in the Shetland Museum yesterday having a wander around the the wonderful exhibition that they currently have on at the moment, Writing the North, which explores the connections through Shetland and Orkney’s literary history. After marvelling at the hand-written letters of Hugh MacDiarmid; an animated journey of Sir Walter Scott in Shetland and Orkney; the first book published by a Shetlander; the delightful yellow gansey belonging to George MacKay Brown and listening to Shetland poetry on an old wireless set – we then thought we would take a quick turn about the Museum before we left. 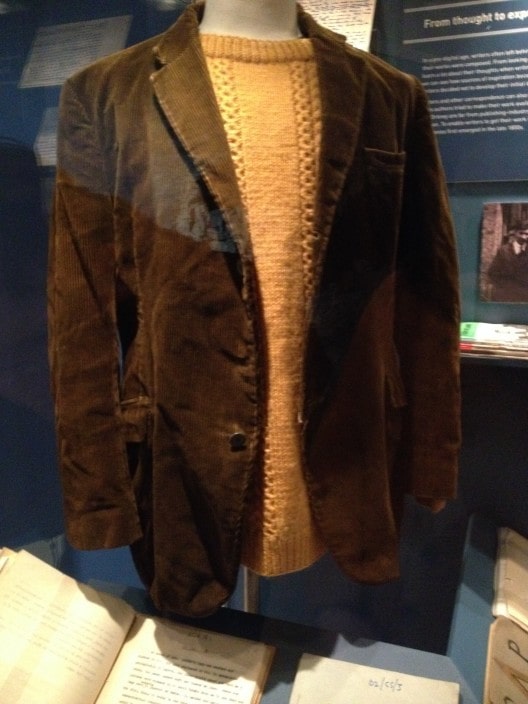 I found myself drawn to the display of the Gunnister Man. He was found in in 1951, when two local men were cutting peats near Gunnister in the North Mainland of Shetland.

The body dated from the late 17th/early 18th century and was purposely buried in the peat along with his possessions, which included coins, a small wooden pail, a belt,  rivlins (foot wear) and a selection of knitted items, including stockings, gauntlets, two caps and a knitted purse.

It is not known if the man was local or a visitor, or if he died of an illness or exposure. Shetland was still in the grip of the Little Ice Age during the suspected dates of the Gunnister Man’s death and his many layers of woollen clothing may not have been enough to help him survive the extremely harsh weather.

The purse that was found in the belongings is the first example of colourwork knitting to be discovered in the isles.

photograph from the Shetland Museum and Archive

The main colour is a dark mixed grey with a small geometric design in red and white wool.

The yarn is a rather unevenly spun 2-ply Z [direction of twist]. There are 11 stitches and 16 rows per inch measured on the stocking stitch. The bag is worked on four needles, and was cast-on with 86 stitches at the top. The first 2 ins are a rib of 3 plain 2 purl or 2 plain 2 purl stitches. There is no shaping. In the plain part there are 3 narrow bands of “Fair Isle” pattern.

This replica in the Shetland Museum shows the design more clearly. 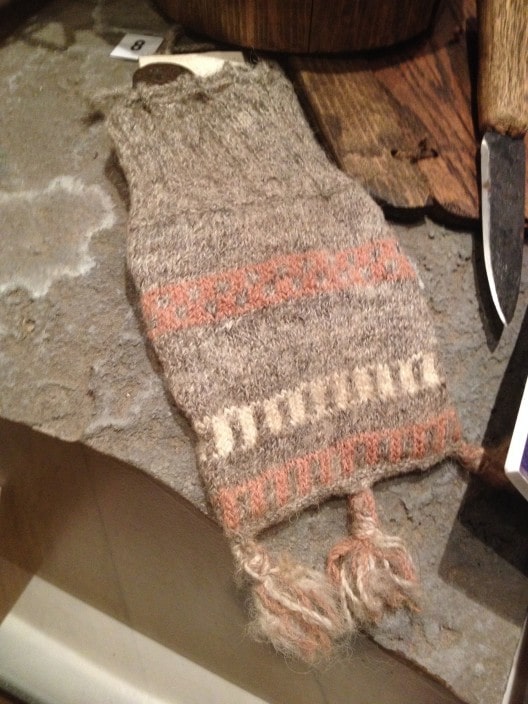 It is rather thrilling to look at this, the little coloured squares – the colours themselves, in fact! – to think that someone wore this in the late 17th century as not only an item of function, but as something designed to be aesthetically pleasing too.

Again, it is uncertain whether the Gunnister Man or his knitted items originated in Shetland. His coins were Swedish and Dutch, but these were common in Shetland at the time and so they offer no further clue, but isn’t it lovely that this little fragment of colour – no doubt lovingly made for the man – was the first of its kind to be be found here in Shetland?

Such a delightful and humble beginning to the tradition we now *often* refer to as Fair Isle. Mighty oaks from little acorns grow!

You can find out more about the Gunnister Man exhibition here and read the original Proceedings of Antiquaries of Scotland article here  which goes into fine detail about the finds and the garments. 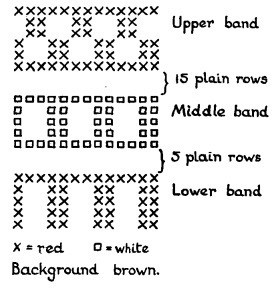